Felix Sater is a mafia-connected Russian-born businessman with a criminal record and deep ties to the Ukraine — and Donald Trump. And one more potentially significant detail: Felix Slater is also a CIA-FBI informant.

By some accounts, Sater connects the dots between Trump and Russia.

From 2002 until 2008, Sater was associated with Bayrock Group, a real estate development firm created by a former Soviet official and wealthy Kazakh investors. Bayrock was based in Trump Tower, and Trump was soon doing deals with them, most notably the failed Trump SoHo hotel.

In a 2013 videotaped deposition, Trump said, “I don’t know him very well.” He added, “if he were sitting in the room right now, I really wouldn’t know what he looked like.”

Sater had an office in Trump Tower. Slater carried business cards from the Trump organization billing himself as a senior Trump advisor. Sater testified in civil litigation that he represented Donald Trump in Russia. In depositions, Sater detailed ongoing business dealings with Trump. He escorted Ivanka Trump and Donald Jr. to Moscow in 2006 in pursuit of deals and flew to Colorado with Mr. Trump.

Here is a photo of Trump not really knowing Felix Sater very well: 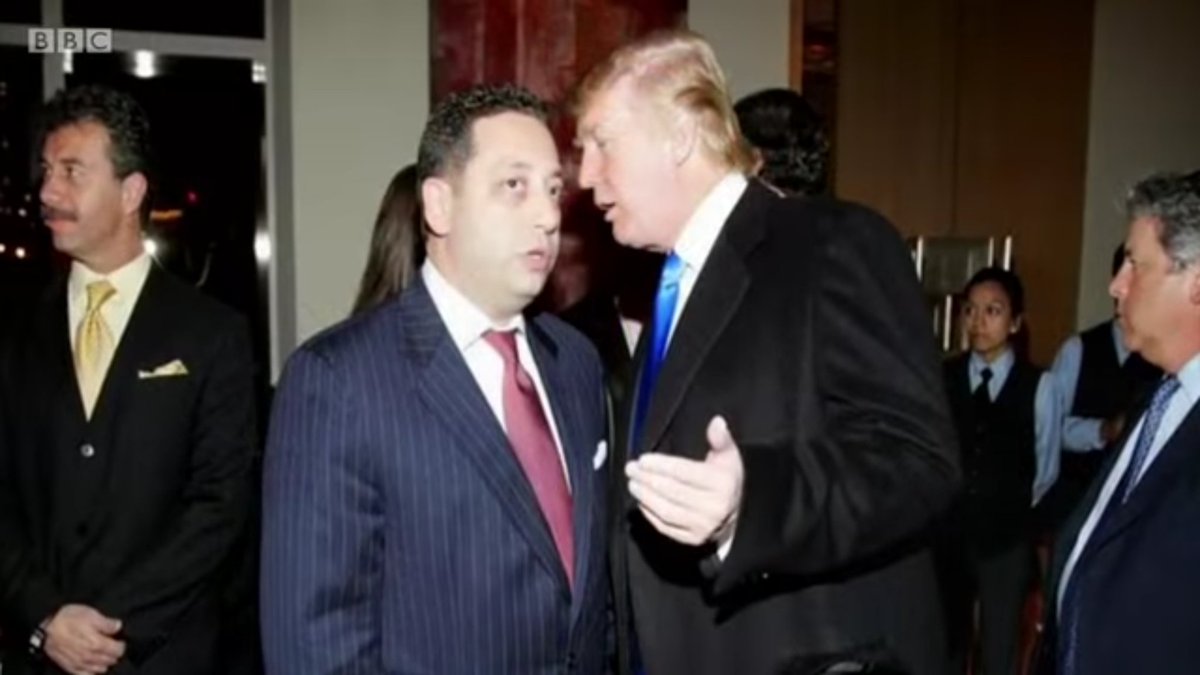 In the late 90s, Sater pled guilty to racketeering for his role in a mafia stock fraud scheme, and then made a deal to evade jail time by becoming a CIA-FBI informant.

The existence of informants like Sater may cause the FBI to stonewall on the release of info to the public on Trump-Russia. There is speculation that FBI does not want to jeopardize a long-running operation targeting mobsters tied to Russian President Vladimir Putin by divulging details about Donald Trump’s contacts with Russia to Trump.

More from @Khanoisseur and @OmarAslamLugo on Felix Slater, and the laundering of dark Russian money through Trump real estate deals:

2. While funneling in Russian money via Bayrock office in Trump Tower, Sater also billed himself as Trump's "Senior… twitter.com/i/web/status/8…

3. In a scene straight out of Goodfellas, Sater cut someone with a margarita glass during a bar fight–so Trump deni… twitter.com/i/web/status/8…

4. Here is Trump with Felix Sater at opening of Trump SoHo which was built with Russian money, brought to Trump by… twitter.com/i/web/status/8… 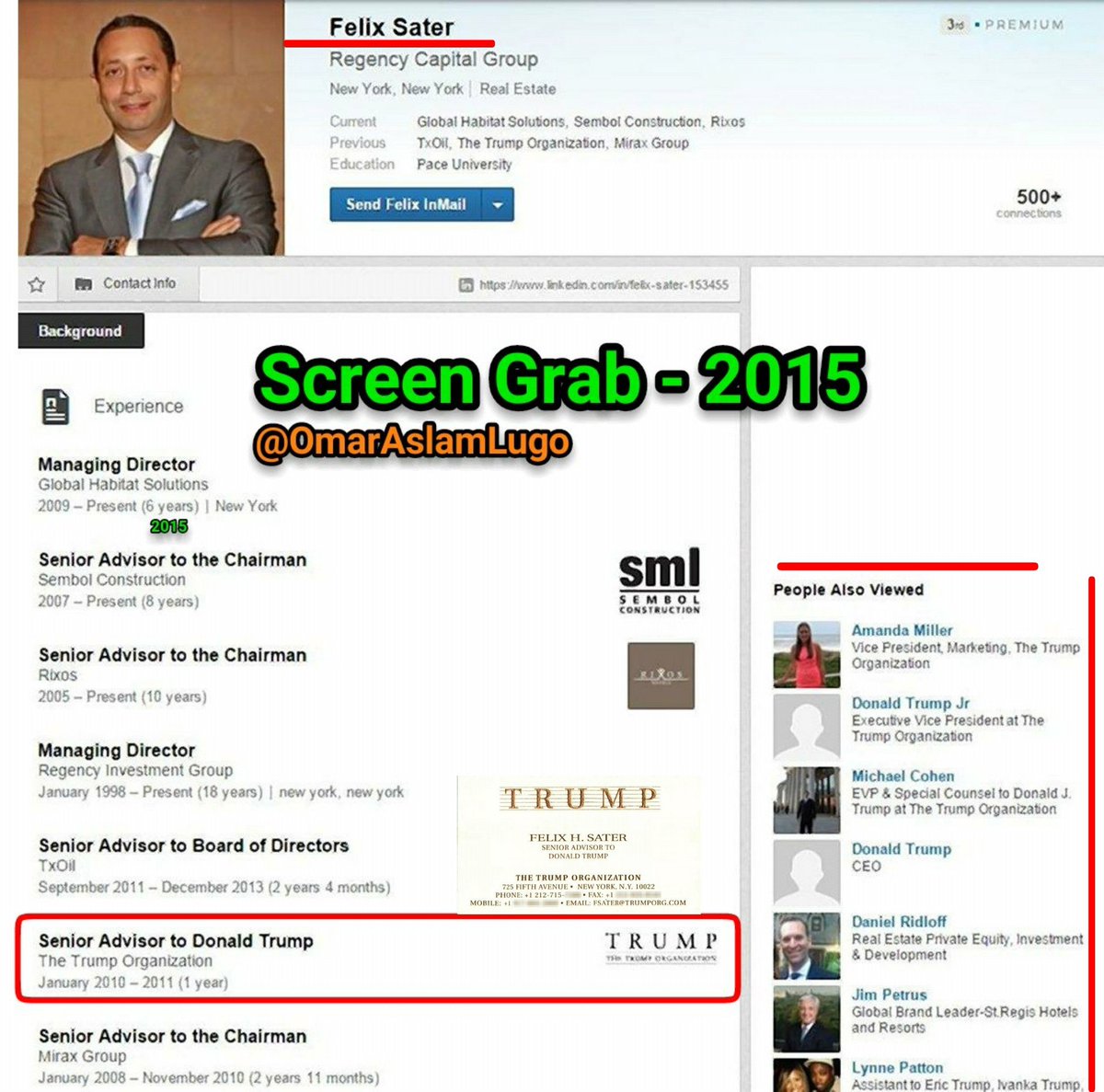 From the tweet above, as reported in the September 2012 Miami Herald article, “Strange bedfellows: Swindler, Stinger-missile brokers”:

“A decade before he launched the celebrated Fort Lauderdale Trump Tower, Felix Sater hatched a bold plan to keep out of prison.

Charged in a New York securities scandal, the 46-year-old businessman traveled to his native Russia where he took on a unique role that went far beyond flipping on dangerous criminals.

He began spying for the CIA.

Tapping into the vast underground of the former Soviet Union, Sater was able to track down a dozen Stinger missiles equipped with powerful tracking devices on the black market.

With the backing of U.S. agents, Sater agreed to buy the weapons — keeping them out of the hands of terrorists. In return, the CIA pledged to keep Sater from going to jail in the stock scam he concocted with New York organized crime figures.

The deal was set.” 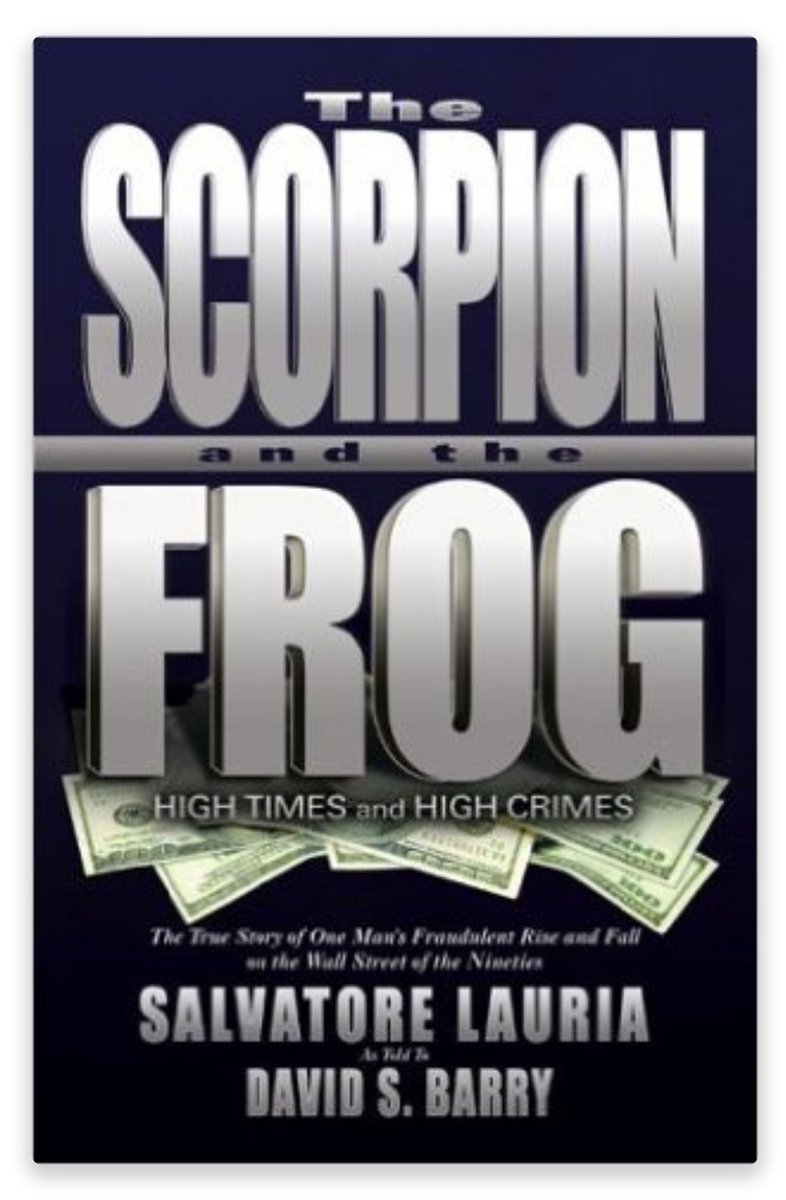 Sater’s co-defendant in the scam, Salvatore Lauria, co-wrote a 274-page book in 2003 describing the deal they cut with the CIA to stay out of prison.

“We were hoping for a free ride or a get-out-of-jail-free card for our crimes on Wall Street,” Salvatore Lauria wrote in The Scorpion and the Frog: High Crimes and High Times.”